Please note: Items below are displayed as a courtesy but do not imply the Hall Committee recommends, approves or endorses content.

The Letterston Community Action Group was Disbanded at the Public Meeting held on 9th February 2016. 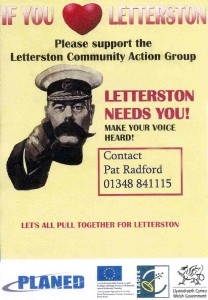 PLANED held two ‘Visioning Workshops‘ on 9th and 23rd May 2013 in the Memorial Hall to explore local concerns and develop a local Action Plan.
On 18th November 2013, Liz Cartright of PLANED opened the Inaugural General Meeting at which we agreed the name of the Group, elected officers  and adopted the proposed Constitution.
Then the new Chair Pat Radford continued with the first AGM.

Our Constitution spells out our aims and the way we operate:

We listen to the concerns of village people and liaise with appropriate Authorities to improve the local conditions of life.

We have a Committee of between three and ten people who meet as needed to pursue the agreed projects and we hold several Public meetings each year to report on progress and obtain feedback.

LCAG has no source of income and will rely on Grants and Donations.
PLANED has generously provided a start-up Grant of £250 to get us off the ground.
Much of our work may consist of bringing the needs of the village to the attention of the authorities which will require little more than office expenses.
However, we will have to apply for Grants for Specific Projects to achieve some of our aims.

A village survey was issued early in 2014, with a rather disappointing 12% response rate.
The responses were analysed and collated into a Report to help prioritise our actions.

The Group  lost Officers through illness and other committments and we struggled to adjust to this loss.

We proposed to hold a Public Meeting on 9th Febraury to wind up the Group unless other residents wished to take over. More than the required 21 days Notice was given of this meeting, with announcements in the local papers and many posters in and around the village. No members of the public, unrelated to the Committee, turned up.

Last Public meeting: Tuesday 9th February 2016.
It was decided by more than the required two thirds majority to Wind Up the Group and pass any remaining assets to the Friday Venue which is a suitable organisation working for the benefit of the local community.

This page will remain for a short time then be removed from the Memorial Hall website.